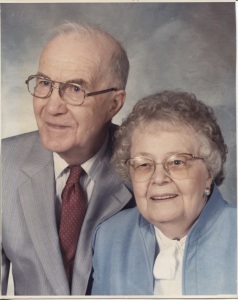 This is the best picture of my grandparents and it’s probably the last one. That was my grandmas favourite outfit.
My grandparents were partners in every sense of the word although my grandfather used to say she was more boss than he was. He was like my Dad that he wouldn’t come up with the idea but would eventually come around to it. In their den they had a sofabed and a lazy boy but they would sit side by side in the couch unless Grandma was doing some sewing. They never fought…not even a disagreement which I kind of thought was unnatural. I loved Janet but even we argued. When she died he was lost without her. He died of cancer but my Mom said he really died of a broken heart. We couldn’t be sad that he was gone because they were reunited.

When we went to sign the papers to sell the house on one of the many forms we had to sign they had to say that Mom was not a spouse at the time of her death. I know that it’s all legal wording but I sat there thinking I would rather it say his widow. Til death do us part meant something to them. I often wonder about people my age who don’t have the piece of paper. Even when Dad died Mom had to produce their marriage certificate and he died one month shy of 40 years together.

Janet was my partner. At the internment my Mom had my Dad, my brother had his girlfriend and I had a friend who stood beside me. She was my coffee, shopping and walking buddy. I miss that companionship.