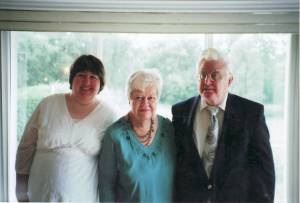 Tomorrow would be my Dad’s birthday. We would often invite his siblings for cake and ice cream in the evening for his birthday. My Dad had the job of taking everyone’s coat. It was easier as we didn’t have room for everyone around the table and you aren’t having a big meal. Plus we didn’t have a lot of seating so we dragged out the dining room chairs to sit on. The men always had the biggest piece and my Dads sister-in-law in had what would be called a sliver. We usually kept the tree up until after his birthday if we were having company as it looks festive. For company we always had tea and all the members of our family drank it clear which made it very easy. One year we even had champagne. I remember I wasn’t old enough to drink but we weren’t given that much. My parents didn’t drink so this was a big deal! My Dad was very particular about his cake, it had to be chocolate. My Mom wasn’t that fussy but hers was usually some sort of white cake. For their 25th anniversary they had half white and half chocolate.
Whenever we had my Dad’s eldest sister for dinner we usually served ham and scalloped potatoes as it could go in the oven and you didn’t have to babysit it. It didn’t matter that this was our go to meal as she would tell us you can’t cook scalloped potatoes for one person. Mom would serve turnip puff with it and there was no hiding the odour of it cooking. Although my Dad loved a big steak his favourite meal was ham and scalloped potatoes. People were surprised when the minister shared that at his funeral.
My Dad LOVED chocolates so his sister would bring that as a gift. My parents taught me that when you went to someone’s home you didn’t go empty handed. Hospitality means different things for different people but I’ve found it definitely starts from giving from the heart.